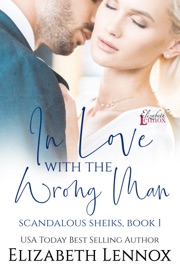 In Love with the Wrong Man

Engaged to the wrong man!

Maya took one look at Sheik Jalil bin Asdoor and knew that she’d made a mistake.  Unfortunately, she was engaged to the sheik’s brother.  But before she could rectify that mistake, a terrible tragedy happened.  Devastated, Maya retreated to her old life, wondering how her life had gone so wrong.  Jalil, the tall, powerful, shockingly handsome brother was everything she wanted in life…and the one man she could never have!

Years later, Jalil tried very hard to remember that Maya was basically his sister-in-law.  Jalil’s brother had died and Maya was very much alive, but she’d buried herself in work instead of embracing life and moving on.  Somehow, he had to convince Maya to live her life…even if he could never have her for himself.

Enjoy the first book in the Scandalous Sheiks series!