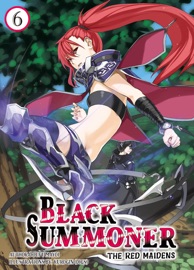 Kelvin, the battle junkie Summoner from another world, continues searching for powerful opponents even after becoming a Rank S adventurer and defeating the Demon Lord. He receives an invitation to Gaun, the Country of Beastkin, where two things are about to happen: a Naming Ceremony for him as a Rank S adventurer and the Beast King Festival. The former is good and all, but what really gets his blood pumping is the latter, which turns out to be a tournament hosted at the Gaun Mixed Fighting Arena, where all the greatest fighters from across the continent are expected to show up!

As Kelvin and his companions continue making their way through the rounds, they encounter not only Goldiana’s sister disciple, but also a mysterious young girl who seems strangely similar to Sera. Who is she and what does she want?

Come along for the ride as this black-clad Grim Reaper and his friends confront powerful foes one after another in the sixth volume of this epic journey!