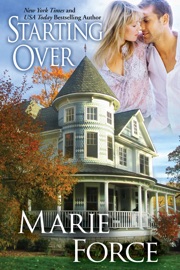 Sometimes rock bottom is the best place to rebuild.

In a drunken stupor, Brandon O'Malley frightens his brother Aidan's girlfriend, enraging his brother and the rest of his family. Aidan offers Brandon the choice of rehab or jail, and Brandon reluctantly enters treatment. While in rehab, he confronts the lifetime of secrets and resentments that fueled his spiral into alcoholism, and these revelations have a major effect on his entire family. When he returns home expecting to resume his supervisory role in the family’s construction business, Brandon learns his father has retired and put his younger brother, Colin, in charge. Brandon is unhappy to be given the job of renovating an apartment building where he loses his heart to an adorable five-year-old tenant named “Mike.” After he falls hard for Michaela, Brandon becomes involved with her mother Daphne, who is running from a past that will later test his sobriety and his mettle as a man.

"The finale to the Treading Water trilogy was an enchanting lesson in ensuring a low point in your life doesn't define the person you become. It is wonderfully written with characters that envelope you in their world. This book is an excellent ending to a series of books that truly pulled at my heartstrings." —Starting Over, A Reviewer Top Pick, Night Owl Reviews.