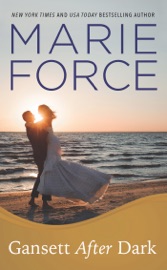 Their dreams are within reach. But first they’ll have to put the past away.

Owen Lawry is days away from leaving Gansett Island to attend the trial of his father, who is charged with assaulting his mother almost a year ago. He has spent his entire adult life trying to outrun his violent past, but the upcoming showdown with the father he hasn't seen in more than a decade has him spending far more time in the past than in the present. His biggest challenge is convincing his pregnant fiancée, Laura McCarthy, to sit out the trip. The last thing he wants is to expose the woman he loves to the pain of his past.

Laura is determined to stand by Owen's side throughout the trial and into the life they have planned together. The trial and her final divorce papers are the only things standing between them and the wedding they have looked forward to all year. Can she convince Owen to let her in and allow her to help him through this difficult time? And what will become of the man she loves if his father walks free?

As Owen and Laura prepare for the emotional battle with his father, his mother, Sarah, finally comes clean about her violent marriage with Charlie Grandchamp, the man who has been her friend and companion for months now. How will Charlie react to hearing Sarah's secrets, and will their relationship move forward now that he finally knows the truth about why she can't bear to let him touch her?

Catch up with all your favorite Gansett Island characters from the past ten and a half books and meet several new characters, including some McCarthy cousins on the island for Laura and Owen's wedding, who will be featured in future books.

While Gansett After Dark could be read as a standalone story, readers will enjoy it more if they have read the rest of the Gansett Island Series, particularly book 6, Season for Love.