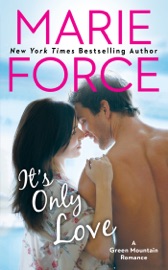 It all starts with a kiss in this Green Mountain Romance from the New York Times bestselling author of And I Love Her.

Ella Abbott has long been secretly in love with Gavin Guthrie. A few recent encounters have only added to her infatuation, especially the kiss they shared at her sister’s wedding. It doesn’t matter to Ella that Gavin is in a bad place. He says there’s no hope for a future with him, that he has nothing to offer her. But all Ella cares about is the love she feels.

It’s been seven long years since Gavin lost his brother. He’d kept himself under control and moving forward until his brother’s beloved dog died and his brother’s widow re-married. Since then, he’s been drinking, fighting, and even getting arrested. It seems the only time his demons leave him alone is when Ella is around.

Gavin knows it wouldn’t be fair to drag Ella into his darkness, but when she inserts herself into his life, what choice does he have but to allow her to soothe his aching heart?